Lungeing is the third exercise that I qualify as fundamental to the horse’s education. It sounds reasonable to think that if you are not capable to ask your horse to move forward, to walk, to trot and canter around you from the ground, there is no reason that it will listen to you once you are on the saddle. That is a great exercise to perform with horses that refuse to trot or canter for instance, or with horses that are used to buck when asked to lope.

The first goal of this exercise is to teach leadership as the first one to move is the loser of this game. Once your horse starts to move around you, that means you have its respect _ although that does not mean it is acquired for its life time yet. The second objective of lungeing a horse at all gaits from the ground is to prepare it to further exercises under the saddle.

Education principles:
1 ) horses learn when you release pressure.
2 ) timing is essential to good horsemanship, recognize the signs of relaxation to make sure you release right on time: blinking eye, lowering the head and neck, chewing mouth, cocking a hind leg.

Stand right in front of the horse, about one meter far from its head. Hold the rope in the left hand to send the horse to the left, and vice-versa. Keep your flag in the other hand. Once the horse is moving around you, position yourself on a line parallel to its shoulder. The flag should remain neutral unless you need it to put pressure as explained later.

First, keep the horse straight in front of you. Once it moves around you, keep the horse’s head tipped slightly inside ALL the time, so the hindquarters are always forced to the outside.

If you think the hind end is getting too close to you, just pull on the rope to draw the head, that will push the hindquarters away. Keep in mind that you should look at the whole horse’s body all the time.

Raise your left hand to point the direction to the horse. Do not pull on the rope, you should operate through a feeling and never force the horse to do anything. At the beginning, you will probably need to use the flag to put pressure on your horse: raise and wave gently the flag until the horse moves the front feet to the direction you chose. Leave your hand down in a neutral position, then stop and reward. Repeat the operation until your horse walks a few steps, put your hand to the neutral position, walk with the horse, release and reward. Later on, you want your horse to keep walking unless you ask otherwise.

Tip: Take the opportunity of this exercise to untrack the horse's hindquarters when you stop it.
Turn slightly to face the horse's hindquarters and move toward this direction. Meanwhile, draw its head and push its hip with the flag until your horse crosses its hind legs without moving forward.
Next, point the direction and wait up to ten seconds to leave some time to your horse to think, to understand your cue. Either it starts to walk around you or you should push it with the flag. After a couple of circles, you should repeat the process in the other direction. Finally, once your horse responds correctly to the cue in both directions, you will start to teach trot and canter. 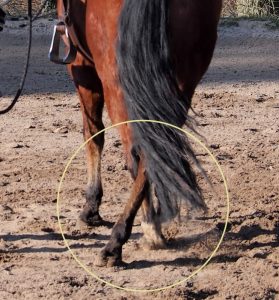 When the horse is trotting, bring it down to a walk by wiggling the rope firmly. Do not stop wiggling until the horse really walks. Once your horse knows all these steps and responds well to the cues, you can teach the canter as you taught the trot.

What if my horse does not move?
Remember that you want to leave some time to your horse to think, to process the information. Yet, if you feel your horse does not understand, you should use the flag as a second-deal pressure: wave the flag gently close to the horse’s balance point _ right behind the location of the cinch _ until it moves away from pressure, then release and let it walk. If the horse remains dull to the flag, then you should tap its flank firmly _ do not be hard or violent, but firm _ until it moves away from pressure, then release and reward. Pretty soon, your horse will understand that the tapping will come right after the waving, so it will move before you tap its flank. Then, it will avoid the waving by responding as soon as you point the direction.

What if my horse starts to crowd me?
That is one of the reasons why you should keep the flag in your hand. If your horse starts to crowd you, or to come too close, tap the horse’s shoulder or belly with the flag until it fades away from you. Do not be aggressive when tapping with the flag, but keep in mind that your security comes first, so feel free to be as firm as necessary. After a few attempts, the horse will understand that it should leave your personal space and start to move directly on a circle around you instead of over you. If the problem remains, then you should back your horse up a lot more.

What if my horse backs up?
A horse would back up in two different situations: either because it is scared of the flag, then you should desensitize it first, or because it does not understand the cue. In this case, you should follow the horse and nicely come by its shoulder to push it away from you with the flag. As soon as it takes the good direction, release pressure and pet it. Start the process again until the horse responds directly without backing up.

What if my horse stops?
Horses, as humans, do not want to exercise for nothing. If it can choose between walk and stop, it will stop. So, at the beginning, you can be sure your horse will stop before you ask for it. Remain in the parallel position and just raise the flag behind the horse’s hindend, that should be enough to push it away from pressure and make it walk again. Sometimes, it will not be enough, then tap it gently on the hind with the flag until it walks forward one or two steps. Pretty soon, it will keep walking _ or trotting or cantering _ unless you ask otherwise.

Go to the printer-friendly version of Lungeing.