November 17, 2014 / Comments Off on Hoof Care: helping a pony with founder

The idea of that article is to share general ideas and tips about how natural trimming can help foundered horses and ponies.

It is quite incredible to see how common are the foundered horses in our breeding farms, riding schools, ranches, equestrian centers and so on. Founder starts when the wall is separated from the coffin bone and this situation is often due to an unbalanced way of life: too rich a diet (loads of carbohydrates) and too poor an activity (stalls and small paddocks being the horse’s whole world).

This little pony had a long history of founder, it had these duck hooves for years and went through these crisis, limping around. At the time we met, it could barely move, actually spending most of the time lying on the ground _ the video here above shows a little footage of its walk, like a very old person…

I took photographs of the front left hoof to illustrate this article but any hoof could have been used as they were all in a very bad shape. Taking a look at the pictures here below, we understand better why walking was so painful: walls were very long and flaring out all around, the frog was elevated so the pony had no support in the back of the hoof and at the same time the very long heels unfortunately helped to rotate the coffin bone in the hoof capsule, hence the wide white line around the edge of P3 that we can see on the third picture.
If you are not familiar with some of the above mentioned terms, please take a look at this page to learn more. 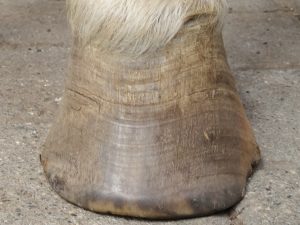 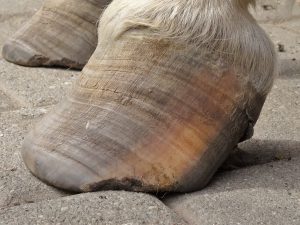 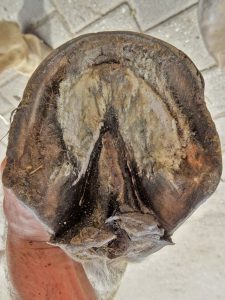 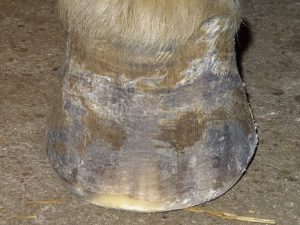 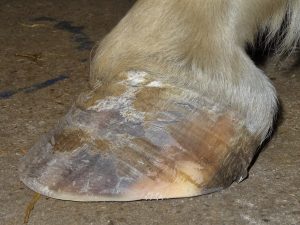 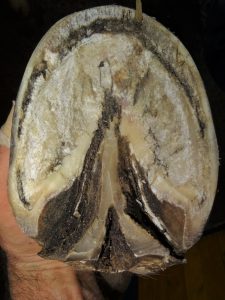 The objective of the first trim was to relieve pain.

In order to do so, I had to offer the pony a possibility to walk correctly, so I shorten the heels as much as I could but left enough material to support the back of the hoof and to make sure there would not be too much pressure on the frog in the coming days and weeks.

Then, I had to shorten the toe to place the breakover right before the white line. 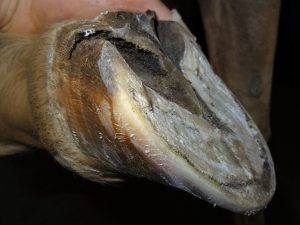 Trimming steps
• Frog: I removed the flaps that could have hidden infection but left as much material as possible to bear the pony's weight;
• Bars: I cut them down to the level of the living sole;
• Sole: the sole was already too thin, so I just removed powdery material around the frog in continuation of the bars;
• Heels: I shortened them down a few millimeters above the level of the living sole;
• Walls: I rasped the wall around to give a more natural shape to the hoof;
• Toe: I shortened it as much as possible, but I left enough laminar wedge to compensate the thinness of the wall.

Two and a half months later 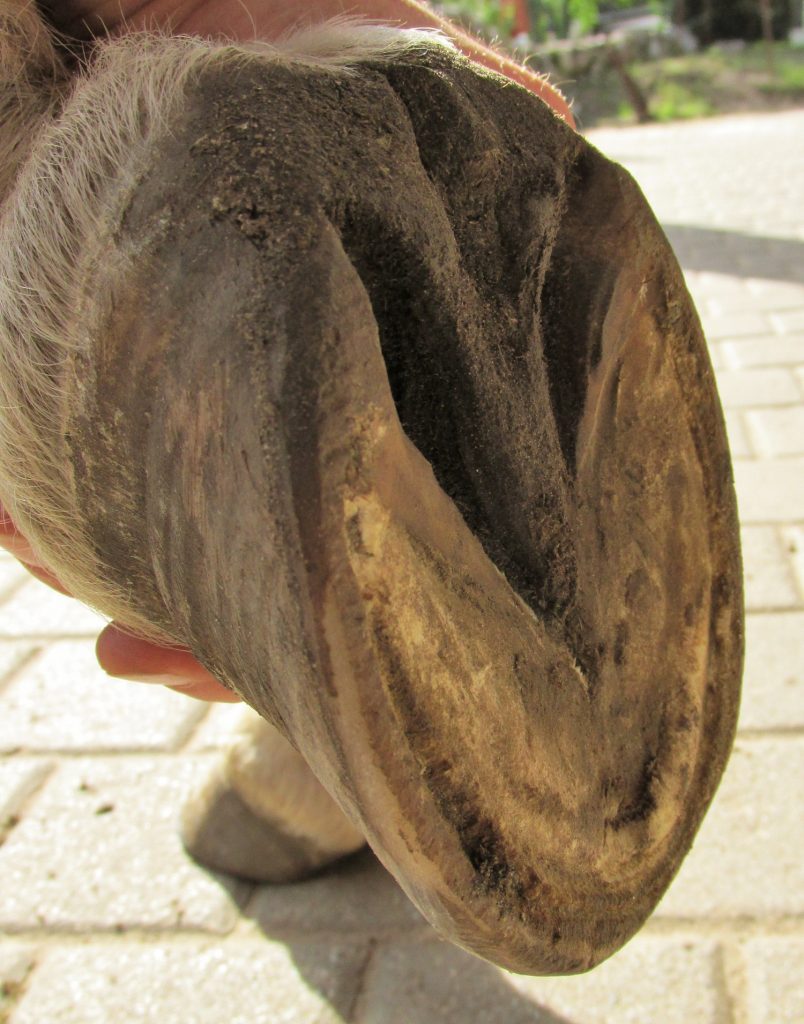 That maintenance trim was the second one since our first meeting. The following pictures have been shot about 24 hours after the trimming (camera battery issues on D-Day ;o).

On the first picture here below, you can notice a small horizontal line at the first fourth of the hoof, right above the rasping around the wall. If you take a look at the same hoof a couple of months earlier, you can see that same line almost at the same distance from the coronet, yet about five centimeters of wall have been removed since then. You can also notice the ring at the top of the hoof that marks the moment when I started to grow the new hoof.

The most remarkable results are under (and inside) the hoof… The frog has grown beautifully as it is now used properly again, the bars maintain themselves quite fairly and the hoof gets a more natural shape (observe the distance from the apex of the frog to the tip of the toe and compare with the same two months before). The only concern I still had at that time was the sole that remained really thin under the coffin bone, yet the hoof needs more time to heal. 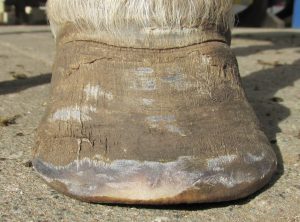 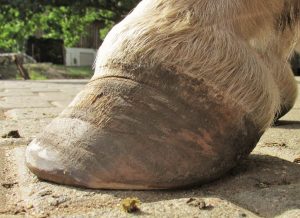 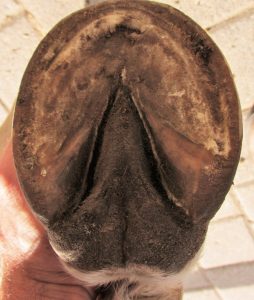 Important information
Trimming is just a part of the healing process. It is not possible to cure a foundered horse or pony if the diet is not correct and well balanced. Moreover, if the horse stands still in a stall all day long, the internal structures of the hoof can not develop correctly and healing might take a lot of time and efforts.