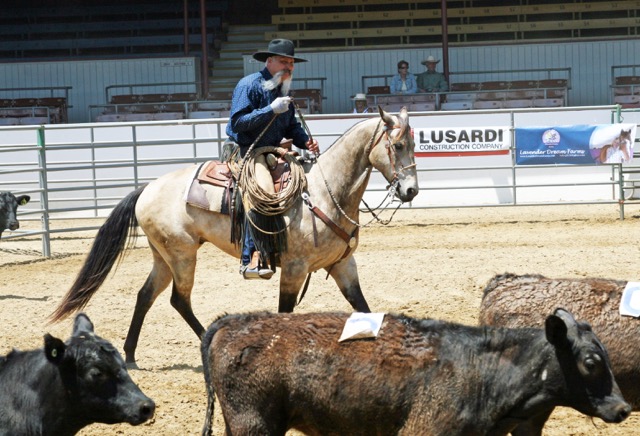 This article has been inspired by the work of California Classics. Dorothy Rogers and Aaron Winchell are handcrafting beautiful bosals in the long tradition of the California Vaquero style.

The natural horsemanship education promoted in this web site is strongly influenced by the long tradition of the California vaqueros. These horsemen took all the necessary time to educate horses as gently and efficiently as possible, in order to finish with a gentle, light and soft horse, responding willingly and quickly, capable of thinking and taking initiatives. I talked about this Vaquero style already when I reviewed Buck Brannaman’s series of DVDs: The Making of a Bridle Horse. Buck Brannaman mentioned many times how his mentors lead him to become the horseman he is today: Ray Hunt, Tom and Bill Dorrance were always following the Journey of the Bridle Horse when educating horses from day one to the “finished” horse, years later.

Traditional Journey of the Bridle Horse (and Rider)

1. When training in the traditional California vaquero style, the journey is traveled in phases. These phases build a strong relationship of trust between horse and rider. Cooperation rather than the use of force characterizes this relationship and each phase contributes to the future.

2. This is a process that builds relationships gradually—there are no shortcuts. The concepts of mañana (“tomorrow”) and poco a poco (“little by little”) are mainstays. Time means nothing and the journey is as important as the destination. It is important to remember that this style can have many paths that lead to the same goal. The path taken will vary with each horse and rider. There is no single “right” way.

3. Constant feedback is another key requirement for success. Whether this comes through self analysis or a competent observer (be it a friend, mentor or hired trainer), identifying areas for improvement and eliminating inconsistent behaviors is critical if horse and rider are to progress.

5. Many believe the horse receives all of the training. This is not so—both horse and rider should be constantly learning. As they progress through the phases together, they learn about one another as well as how to perform specific tasks. The schooling can be broken down into the following stages:

Here the horse and rider learn the basics of understanding and start building a relationship. Objectives and behaviors include:

6. Foundations of learning rudimentary signal communication are traditionally in a corral or later a round pen, guided from the back of another horse or from the ground. This also gives the human and the horse time to size one another up and trust can begin. The vaquero’s training works with the nature of the horse.

7. Beyond the basics, two fundamental schools of thought are offered:

a. those who do little on the ground. The objective is to get the horses going under saddle and on the payroll as soon as possible.

b. those who build a strong basis of understanding on the ground prior to saddling and easing the horse into work.

8. Ground work is done with a heavy hackamore whose mecate is tied for a lunge type line, or of late a rope halter (we recommend the former). Upon completing pre-school ground work, the mecate is retied as reins and lead. Colts are ridden in the hackamore for the kindergarten and primary school phases. Mature horses are also put into the hackamore for re-schooling.

This stage builds on what was learned during Kindergarten. From here we develop more advanced skills:


◦ Balance and re-balance
◦ Proper positioning
◦ Interpreting single hand or leg signals
◦ Learning the ropes of tasks
◦ Developing muscles, wind and ligaments by covering country and doing ranch jobs
◦ Gaining experience in rope work and gathering cattle
◦ Transitions
◦ Rating
◦ Lead changes
◦ Direction changes
◦ Basic cattle handling and later roping
◦ Becoming familiar with and increasing confidence in an expanding variety of situations
◦ Development of signals as units of communication
◦ Neck reining basics
◦ Vertical and lateral flexion
◦ Rocking back beginning to coil the loins and starting to lift at the withers, thereby freeing the shoulders
◦ Isolating each body portion
◦ Beginning to know what to expect and how to react 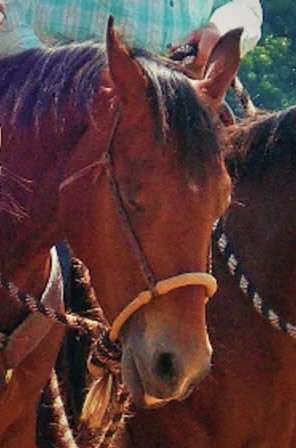 12. The old saying states: “When the true hackamore horse is about as good as he is going to get,” he can move into the upperclassman stages in the two rein.

This is a critical transition phase where the partnership between horse and rider continues to develop. During this phase we see:


◦ Starting in the 3/8” bosalita and bit (either a leverage to start or straight to the spade in the old style)
◦ Increased responsiveness
◦ Advanced tasks and maneuvers
◦ Cattle work outside
◦ Learning to pick up the bit (which is, remember, actually suspended from the crown and governed by an appropriately adjusted leather curb)
◦ Easing into the transition from 3/8″ bosalita to the bit for the shortened primary signal
◦ Developing self carriage and a top line
◦ Increased endurance
◦ Refined neck reining
◦ The horse noting & responding to the internal state of the rider
◦ More complex signals
◦ The start of working straight
◦ Speed, strength and rhythm
◦ Comprehending what the situation requires
◦ Beginning to “fill in” as the partnership develops 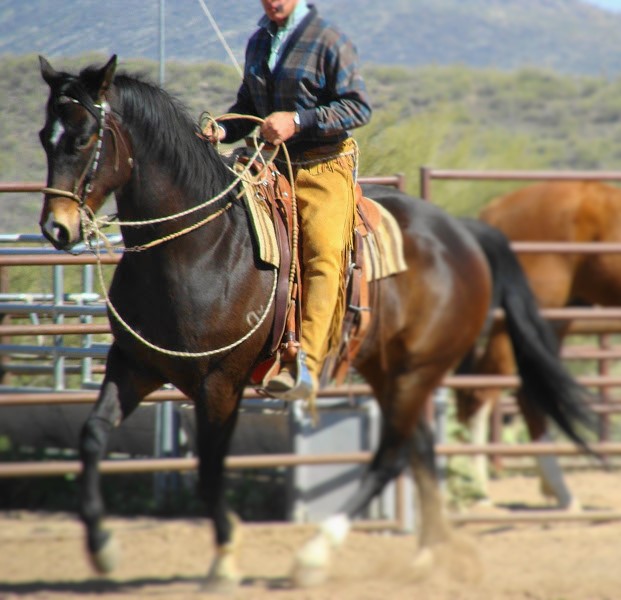 College and Graduate Work: the Bridle 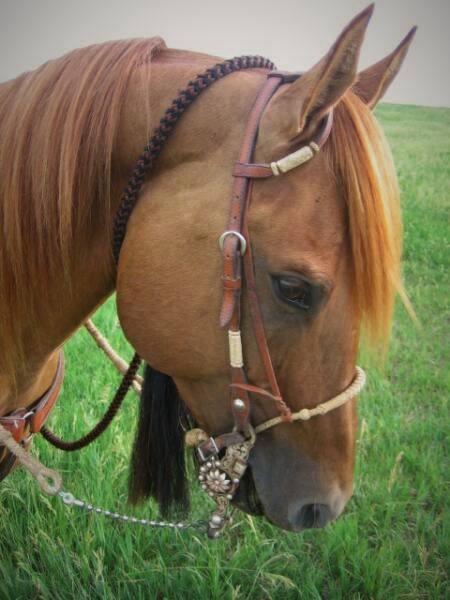 Finally, horse and rider display the confident ability to handle nearly any situation, at any speed, in any direction with efficiency, grace and fluidity. Communication is achieved through complex sets of signals and “filling in” from experience.

The horse works straight: in his body and straight up in the bridle. By consistently working toward refinement and honing skills, the progress toward the responsive, moist (soft) mouthed bridle horse is never boring; there is always something new to work on and refine while continuing preservation for the future.

Seldom truly attained today, the post graduate level features the nuances of the spade bit for the bridle horse honed to an art. The relationship between horse and rider is well-developed and continues to grow as long as they are partnered in work.

Ideally, the rider considers himself a steward and always offers his best abilities as he and his horse work together. The California vaquero style is not as concerned about what the task is so much as how well horse and rider perform together as they do the job. This is the pride and legacy of the legendary Californios.

Modern Journey to the Bridle Horse (and Rider)

Buck Brannaman _ taking example on his elders Ray Hunt, Tom Dorrance and his brother Bill Dorrance _ adds another step to start the journey: the snaffle bit.

I personally follow that method too as I think it is important to work horses in a simple smooth snaffle bit. There is a very pragmatic reason to this choice: horses live in a world where riders, most of the time, do not take the time to learn gentle riding. Since they (the horses) have chances to be ridden by many different riders during their lifetime, to be sold and purchased several times, and since most of the riders know only the bits, I think it is important that horses know how to react as smoothly as possible to the bit. The more educated to the bit they are, the less their riders will be prone to use heavy hands…

That modern journey is traveled in slightly different phases: 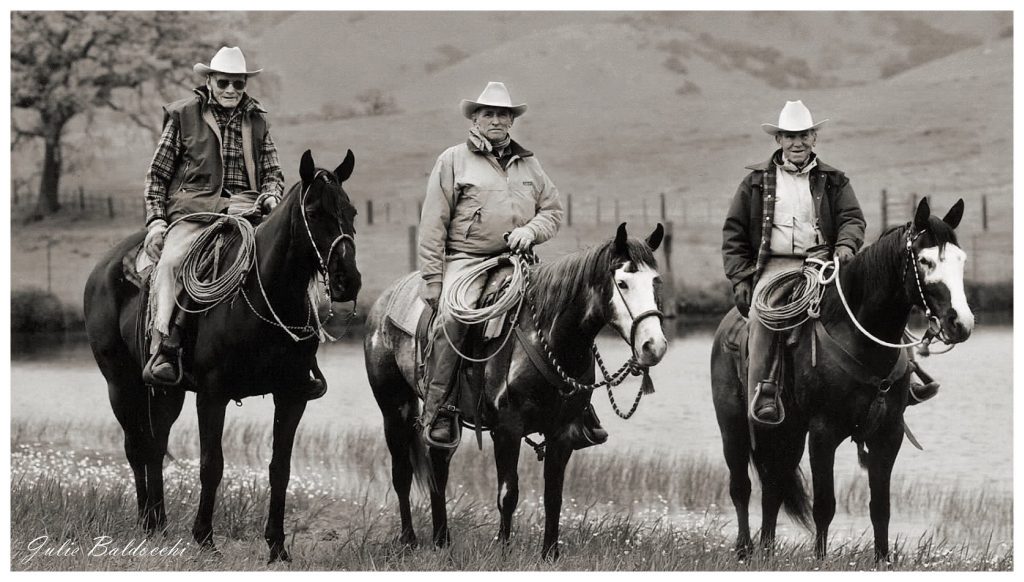 Natural Horsemanship as per the Californio Vaquero tradition: three of the greatest horsemen displaying three stages of this education process.
From right to left:
– Tom Dorrance on a snaffle bit horse (first stage);
– Ray Hunt on a bosal horse (first and second stage);
– Bill Dorrance on a bridle horse (fourth stage _ third being the two-rein horse).

Although you can use any of these equipment when practicing the exercises described in this web site, they hardly find their place in the traditional Vaquero style.

The reason is that a sidepull or a hackamore can not substitute a snaffle bit in the first phase, since the precision of the bit requires that very light touch at the corner of the horse’s mouth.
On the other hand, it can not replace the bosal correctly neither, as the pressure of the reins is supposed to come from under the horse’s chin in order to work lightness and softness, when the sidepull is what its name describes: pulling from the sides…