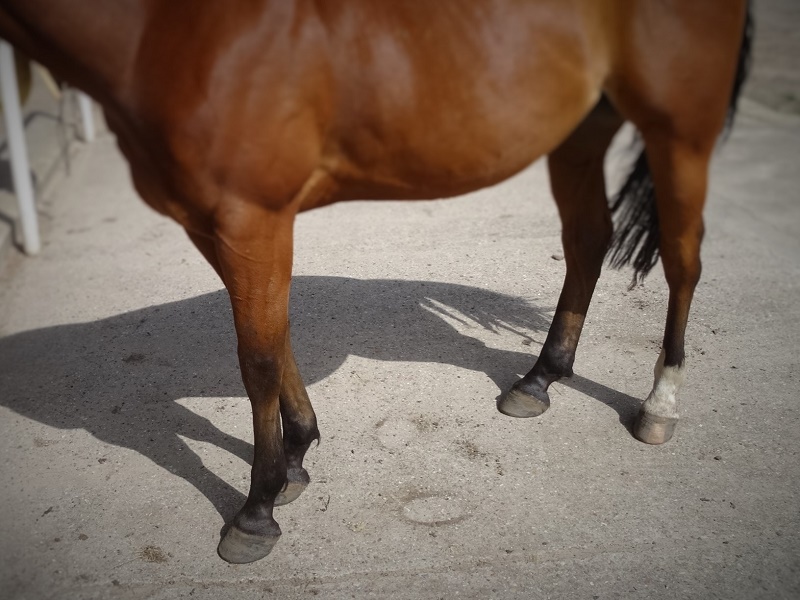 You may remember the first article I wrote about hoof care: “rehabilitating hooves contaminated with deep thrush”. This new article follows that horse and its hooves, three months later…

The idea is to share with you a practical case study to show how natural trimming methods, safely applied to our equine partners, can only be helpful. The most important parameter to take into account here is time, which is the fourth dimension of a hoof: its capacity to help itself to grow sound if correctly helped by a non-intrusive trimming.

The very first trim happened on March 19, the hoof was very damaged: frog destroyed by the deep thrush, hoof wall way too long, under-run heels… After studying natural trimming methods, I decided to take care of my horse’s hooves myself and started to work! One month later, we could see the first changes although there was still a lot to do. The most interesting on my mind is to observe how the frog is growing new, straight from the bulbs and slightly spreading apart from the central groove. 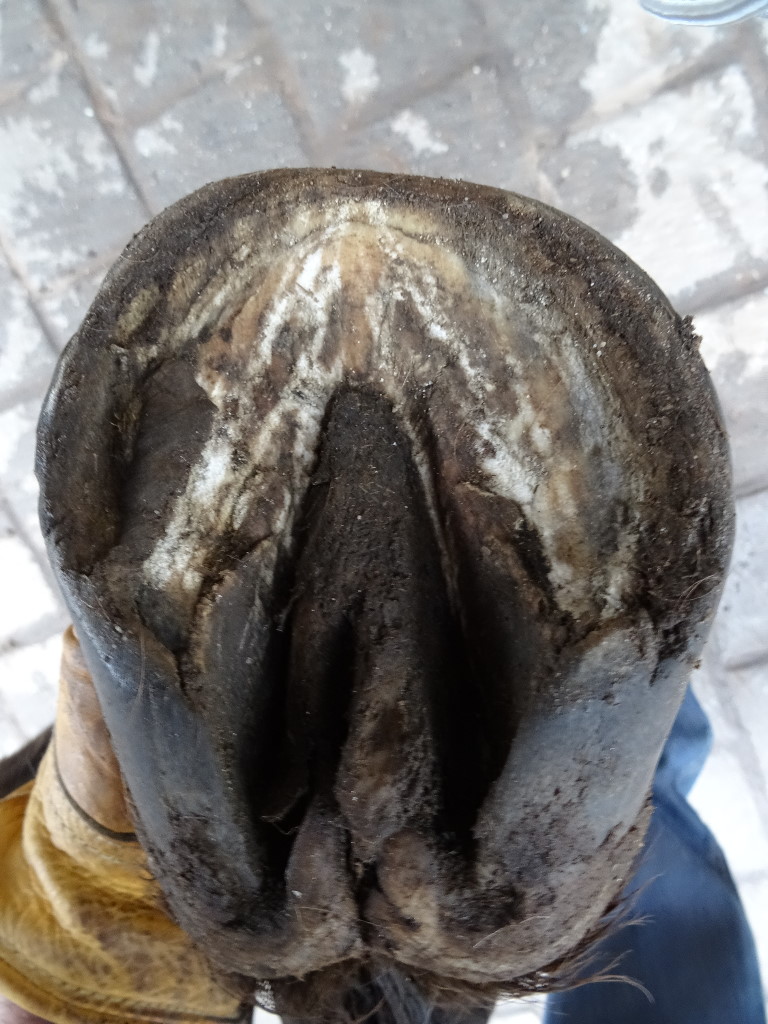 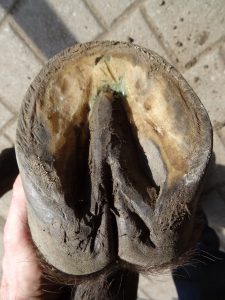 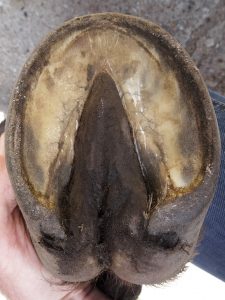 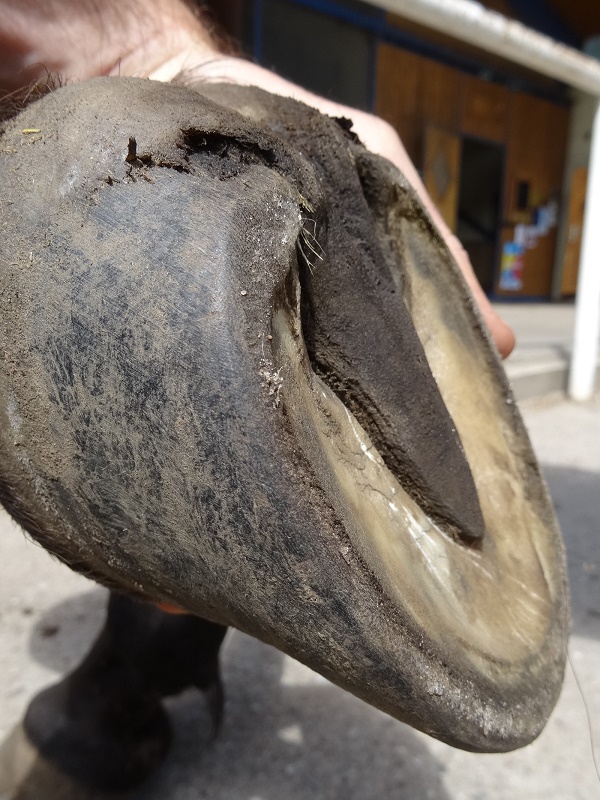 The third picture has been shot on July 1st, one day after the maintenance trim. Since the first two trims _ which were quite “heavy” operations _ maintenance is an easy thing: rasping down the wall to a reasonable length, taking care of the heels and rasping the mustang roll.

Here the frog has become quite a lot wider and thicker, this will help the horse to improve the impact of its feet as the objective is to help it to put the foot down with the heels first in order to build up again the lateral cartilages and to bring the coffin bone back in place, up in the capsule.

Another positive change is the formation of the solar dome that is getting better.

There still is a lot to do though as we can observe how low the coffin bone is on this picture: the lateral groove is quite shallow at the apex of the frog which is a sign of a sunken P3. Moreover, you can see the toe line of the bone (brown circular line right before the white line at the toe)…

This line shows that the wall is too much forward as the toe should end about one centimeter from there.

This is confirmed by the new growing hoof: the first 3 to 4 cm of the wall right under the coronet show how the hoof wants to grow. If you draw a straight line from there, you can easily see an angle after the first upper third of growth…

I took the hind left hoof as a case study because my horse used to limp on this particular foot on the lope. The first picture shows clearly how deformed was the hoof: prominent bars, large left heel, imbalance, damaged frog… One month later, we can observe the first changes: bars and heels tend to get to more natural sizes, the frog looks better and cleaner. 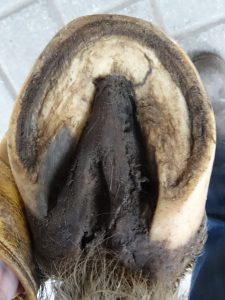 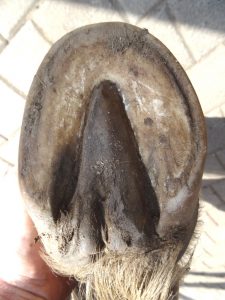 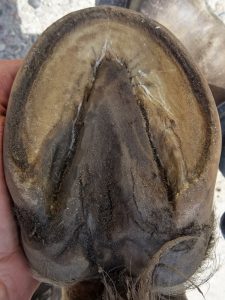 Three months after the very first trim, things definitely look better. The general shape of the hoof is more in accordance with what it should look like. The heels are more balanced, yet they are not as short as they should, since the inside tissues are not grown back to normal. We can see how the frog has widened and how the central groove has filled up, but it is still too thin and fragile to carry correctly the horse’s weight on the back of the foot.

Comparing the same hoof from the side shows how it has developed and grown in three months. It was a typical example of under-run heels, you can also observe the convex shape of the wall from coronet to toe. Three months later, the same view shows a larger hoof, laying better on the ground. Heels are also getting higher step by step.

The view from the bulbs also shows pretty well how bad the hoof was initially and how it is growing back to normal. The deep thrush had clearly attacked and deeply damaged the frog. The second picture, three months later, shows the developments: frog is sounder but needs to keep growing. Heels are also more balanced and on a good way to become normal soon. 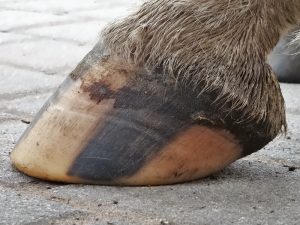 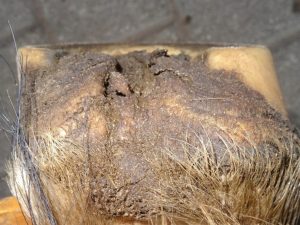 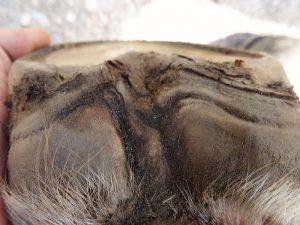 Finally, that is really just an intermediary step: hooves are clearly in a lot better shape than they were three months ago, yet there still is a long way to go to nice, sound and strong feet.