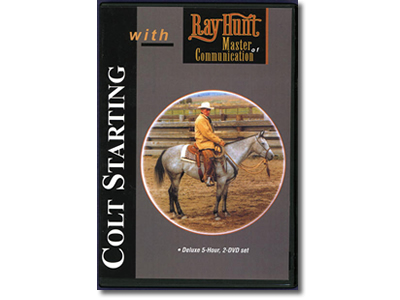 Ray Hunt Colt Starting is a two-DVD set of real-time horsemanship, Ray Hunt starts four colts over three days. “Do not try to catch a horse, try to get it ready to be caught.

All Ray Hunt’s philosophy is in this kind of sentences delivered from time to time along the video.

His book Think Harmony With Horses explains it better but the DVDs are a pretty good illustration of his approach: suggest to the horse, let it find its way, do not force it!

The complete video is divided into five different parts:

The last two parts are not really interesting. If you are experienced enough to get interested in starting horses, the questions asked to Ray Hunt do not make much sense, as they are really questions from beginners.

On the other hand, the interview is not very original, questions are basics, a lot of “I love what you do” and “You’re the best” which do not bring much to horsemen and horsewomen looking for useful information. On the other hand, the first three parts, i.e. the three days of colt starting, are great! If you want to start a horse, you definitely HAVE TO watch the DVDs before as it is a great source of inspiration and it shows how long it can take, how patient you must be to do things correctly…

Ray Hunt starts four young horses in this series and shows us the different steps he uses to make the horse feel comfortable and secured with him. On the first day, he works the horse from the ground, desensitizes it and finally saddles it for the first time. Groundwork is a key to this gentle method as Ray Hunt wants the horse to respond to his presence, to face him willingly. In order to do that, Ray Hunt begins by pushing the hind legs, putting pressure on them simply by getting closer.

Later, when he can touch the horse and put a halter on it, he repeats the process by laying the rope on the horse’s side and pulling it gently from its back: that invites the horse to change its eye, then yield the hindquarters until it faces the horseman again. Then, Ray Hunt gets the horse used to the rope, to the blanket and finally to the saddle. Eventually, he puts the saddle on the horse, cinches it up and leaves the horse in liberty. His idea is to let the horse finds its way to live with it.

With the third horse, Ray Hunt shows us how to start a colt from horse back. Principles remain the same but we are quickly impressed by the responses of both horses to the horseman actions! 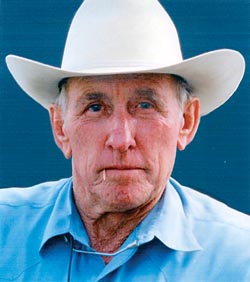 The second day of starting those colts is their riding baptism. First, Ray Hunt shows how gentle and smooth we ought to be around these young horses when approaching with the pads and saddling them. Then, he works the four colts altogether from his horse, to have them used to see humans from that point of view, work is the same as the day before: yield the hindquarters, then move the front end through. When a horse gets in trouble and starts to walk around, or even to lope around, the horseman’s words are wise by their simplicity: “Let it find a place where to stop”. That is it! Do not rush, do not force it to stop, do not demand it to feel good, that won’t work! A horse needs to feel good, to feel you as a source of comfort and peace, and letting it move around until it finds a good place to be around you is the best thing you can do…

Later, Ray Hunt gives a few tips how to mount a horse for the first time: toes in the stirrup, hand in the mane, lean on the horse and pet it… until it stands still, then it’s time to get on. The very first thing Ray Hunt does from the saddle is to bend the head, as it will help later to bend the whole body. Then he takes the opportunity of this second day to take the saddle off and on to get the horse used to it and to the cinch-up.

Finally, the third day is a repetition of the first two with a couple of extra exercises. First, Ray Hunt saddles all the horses from the beginning and starts with some groundwork, same basic moves to yield the hind legs and push the front legs through. Next, that will be the first move he will operate from the saddle. Later on, this is followed by a new exercise called the snake trail (Buck Brannaman calls it the serpentine, open or short). All this is done casually, no hard pressure, never.

The very last step of the clinic is to put on a snaffle bit, gently, rubbing the face, the eyes, the ears and leaving some time to the horse to take the bit. One more time: do not force the bit into the horse’s mouth, present the bit and let the horse figure out what to do with it. Eventually, we can see Ray Hunt backing up his colt with a soft feel, then chasing the other colts with a flag in his hand, the reins in the other and loping around… that horse was ridden for the second time of its life!

As a conclusion, I strongly recommend the DVDs to those who wants to start horses, it is a great source of information and inspiration. It shows how dedicated, how patient you should be if you want to start gently a horse, if you want to build confidence, lightness and softness from day one.