July 12, 2013 / Comments Off on DVDs: Downunder Horsemanship by Clinton Anderson

Downunder Horsemanship is the trademark registered by Clinton Anderson to designate his methods to start colts, to train horses on the ground and from the saddle.

His horsemanship is based on the knowledge he acquired in Australia. Later, he visited the United States where he learnt from Ray Hunt some basic principles:

“Make the wrong thing difficult, the right thing easy.
Do as easy as possible, as firm as necessary. 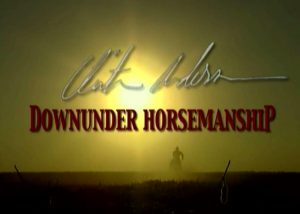 The method is built as a Matryoshka doll. First, the program is made of three main parts: Fundamentals, Intermediate and Advanced. Next, each part is cut into several exercises, each exercise being described in eight steps:

This structure of the method is its greatest quality as anyone can be around a horse safely and learn to practice a quite nice horsemanship. Yet, that is also its main problem, its limit to communicate with a horse. Indeed, an exercise such as Full/Half circle as described in European Horsemanship program is the equivalent of half a dozen exercises in Clinton Anderson’s approach. Desensitizing is covered by at least a dozen exercises!

Unfortunately, although the initial motivation was good: to give the possibility to anyone to practice quickly horsemanship, that method based on specific moves in order to produce a reaction by the horse becomes a Mechanical Horsemanship. My opinion is that it is a very practical method for beginners, but as soon as you start to get better with your horse you ought to move to a more refined horsemanship. 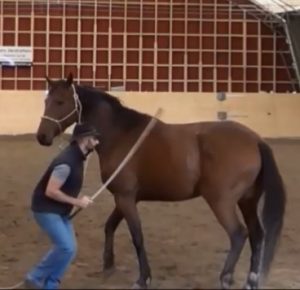 I do not question the fact that you can get good results when following Downunder Horsemanship DVDs, but I know for a fact that you can achieve a far better connection with your horse by using smarter methods.

Last, I have learnt to avoid people who try to sell their ideas: Clinton Anderson’s web site offers books, DVDs, tack, hats, apparel, knives, gadgets, grooming products, and so on. He performs in shows all around the US and stars in a TV series. He created an academy to teach students to become Clinton Anderson’s signature clinicians, etc. These heavy marketing methods are not compatible with the philosophy of a good and natural horsemanship. Moreover, the DVDs are built on methods known for years, decades, centuries and should not be introduced as a personal method developed by Clinton Anderson, based on his personal experience…
As a conclusion, I invite you to take a look at those DVDs if you ever find the possibility to watch them without spending $1,000! But just keep in mind that method should be considered as one step to something even better.