I have read and analyzed Oeuvres Complètes (the complete works) by Nuno Oliveira in French, yet I will refer to books that have sometimes been translated and published in English: Reflections on Equestrian Art (1965), Classical Principles of the Art of Training Horses (1983), Horses and Their Riders (1987)…

There would be a lot to write about Nuno Oliveira. In a few words, we can say he is the direct descendant of Xenophon and all the hedonist horsemen who followed this path. The dressage master often quotes French horsemen such as the Captain Beudant, but even more important: François Baucher and François Robichon de la Guérinière.

“Ask much, be content with little and reward often.

Oliveira is to Dressage what Dorrance is to Western riding

I consider these men as cousins in horsemanship: Tom Dorrance was the mentor of many great horsemen, he was said to have a gift with horses, a special understanding; Nuno Oliveira has the same aura in the world of classic dressage. Both have exported their image out of their nations, both have lived for horses. I was literally stunned to read Nuno Oliveira speaking about Feel, Timing and Balance. 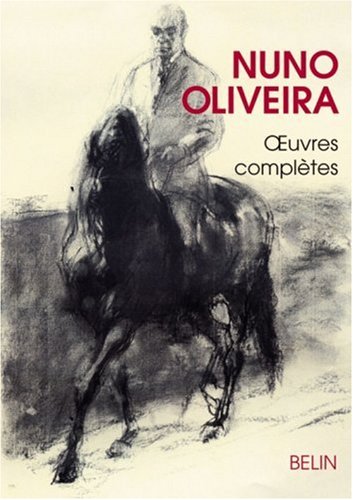 The equestrian instructor talks about tact and recalls how important it is to feel the horse, to release and reward in time, finally he explains how to use the rider’s balance to lead the horse gently and naturally.

I could actually spend the whole article to quote similarities between those two men: using the soft feel, preparing the position for the transition, being gentle and delicate, no gimmicks (in dressage!!!), considering the horse where it is and not where we would like it to be, etc. But there is something important that Nuno Oliveira brings to the picture…
“Only the one who loves, understands and feels the horse can have the tact. 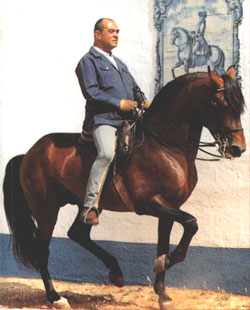 The dressage expert rider, Ecuyer as he liked to call it, is the one who knows that riding is a lot more than pure technique. He is the one who does not forget that equitation is an art, not a sport. He is finally the one who knows that art does not exist without love. Here is the schism between Haute-Ecole and Dressage, as explained by Nuno Oliveira himself. He tends to oppose a Latin school _ mostly promoted by the equitation practiced in France for centuries _ to the Saxon school _ which is basically the German dressage. I do not like to generalize things in term of nations, as I think that the problem is international nowadays and I actually agree a lot more with his other major idea: equitation for prizes vs equitation for horses.

Here is the truth on my mind. People who chase prizes and glory in competitions and shows forget the quintessence of equestrianism: the horse! They look for quick solutions to obtain specific reactions and moves from the horse, they force their equine partners to obey in a way or another. The horse’s psychological and physical integrity and dignity are put aside in favor of cameras and ribbons…

“Equestrian Art is not to impress observers but to establish such harmony and understanding with the horse that, when dismounting, the rider can feel moments of genuine beauty and that his spirit has raised above vulgarity and mediocrity.

Nuno Oliveira was Portuguese and started to write in the 60’s, he belonged to a certain history and some of his principles would be considered old-fashioned today. In a way, I think he could not go to the end of his ideas, simply because of that context. For instance, I found quite curious that such a man, deeply in love with horses and what they represent, would not start a foal more softly: he indeed explains in his last book how three assistants should come and help to get the horse used to the bridle, to the saddle and to the whip. In Souvenirs…, he tells us how two of his own dressage horses bucked him off! In another book, he mentions how careful he had to be when he took off his hat during shows not to scare his horse…

To conclude this article, I would like to temper the idolization of the man as I think that none should follow a Master and horsemanship should not be a religion. Yet, it is not questionable that Nuno Oliveira has been a great horseman in his own way and a lot of dressage horses would live a better life if their riders were readers of such books too. Finally, I did not mention all the practical and technical information available in Oeuvres Complètes, but this is a very interesting and easy-to-access source to dressage exercises and to riding tips useful to all riders.