From my very first researches about natural horsemanship, I found many mentions of Pat Parelli and his methods. I had the opportunity to watch some videos which pushed me away from this horse(business)man. Yet, it was about time for me to read carefully and analyze his main book Natural Horse-Man-Ship as I received many questions about Parelli instructors… “Horsemanship is nothing more than a series of good habits.

Pat Parelli started his equine career like most of us: he was passionate with horses, but HE had the chance to meet great horsemen who taught him all the basics. We can easily observe the strong influence of Tom Dorrance and Ray Hunt all along the book. Indeed, he regularly mentions how important it is to adjust to the situation, to feel of the horse and for the horse, to make our ideas become the horse’s ideas, etc. Sometimes, he just copies and pastes concepts _ which I do not criticize as we do not have to re-invent the wheel all the time and something good should be used, recycled and reused: 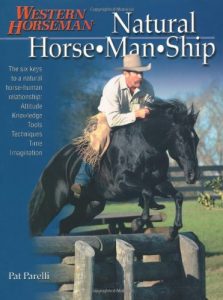 “Feel, timing, and balance are three separate qualities but they are linked together” (cf. Tom Dorrance), “Knowing where a horse’s feet are at all the times and where his weight should be helps you to know how to help him to do what you want him to do with a natural balance” (cf. Ray Hunt), “Try not to move your feet and get your horse to move his feet where you want them” (cf. Buck Brannaman), “This should cause your horse to feel of you and for you so you can feel together” (cf. Ray Hunt), etc. On the other hand, there are some common-sense advises that horse owners and riders should consider.

As he mentions, a common mistake is to buy a young horse for a green rider, expecting them to grow together, yet most of the time consequences are disastrous. Pat Parelli also often talks about empathy and I can not agree more with him.

First, there are a few nonsense that a famous horseman such as Pat Parelli should have avoided, although I have to credit him with the fact that I have not read ONE sentence that could cause harm or pain to the horses _ even though it’s not always that nice in real-life with Parelli’s methods. Some of these nonsense are due to hasty judgments, as if Pat Parelli was convinced to detain the truth for all: for instance, he is quite rigid when sorting horses in prey animals and humans in predators; another example is his saying that “The trot is the only gait the horse can do in place” which is wrong (Nuno Oliveira himself could lope a horse in place and even backward). “We smell like what we eat (meat); our eyes are on the front of our heads; and our ears are back all the time, which, to a horse, is an aggressive expression.

Some are just very strange ideas, that could be dangerous actually. Pat Parelli invites his readers to “Ride bareback with hackamore [rope halter] and progress string [rope]”, which could be a wreck if not done correctly or at the right moment. I do not even understand how a horseman can advise to get rid of the security of the saddle on young or uneducated horses. On the other hand, as he wears spurs and like them, he finds some lame excuse to them: “They are probably one of the most humane tools to use in communication with horses”, really?!?
Another example is the gradation system of his exercises: it takes nine steps to back a horse up, but just two to make it move forward (“ask your horse to start trotting to the right by smiling with all your cheeks. If that doesn’t work, use your left hand to spank the horse’s hindquarters”)… first smile, then spank!

Pat Parelli is to Natural Horsemanship what Sigmund Freud was to philosophy. Indeed, Pat Parelli has decided to make money out of horses, which is not wrong, but the method is not very honorable. The horseman has a quite egocentric approach: his claim is that his method is based on years of personal observations of the horses and his saying is a universal truth; he pretends to have developed a hard science based on maths to deal with horses; last, but not least, he has organized his business on a pyramidal system to spread his theories (Parelli is the one who found the keys, he teaches selected disciples who will then spread the word to the rest of the world).


Freud is not mentioned directly in the book, yet Pat Parelli talks about “a book by Maxwell Maitz titled Psycho-Cybernetics”, who has been clearly influenced by Freudian concepts.
“When I look at a horse, I try to be a diagnostician and a psychoanalyst at the same time.

Pat Parelli gives the keys to his mind in the book and that is quite interesting to read him say that “Natural Horse-Man-Ship is so old, it’s new again”, which is pretty convenient when you want to become the new messiah (“Over many years and through much observation, I’ve found that…” is quite in contradiction with the quotes of Tom Dorrance and Ray Hunt, some of his concepts having already been developed by Xenophon more than 2,000 years ago). By applying Parelli’s psychoanalyses to himself, sentences such as this one can be quite revealing too: “You can get almost religious about horsemanship.”
All along Natural Horse-Man-Ship, Pat Parelli reveals hidden truths to his readers, there is no questioning, no doubts: he knows and he tells. His word is good for both horses that are all “born cowards, born claustrophobies [sic], and born full-throttle-aholics” (all of them!!!) and humans which he knows as well as horses: “Adult human beings […] look for rules, regulations, dogmatic answers, and want to apply them to horses.” A few lines later, he informs us that after 12, children become adults and succumb to pressure. Later, another thruth is revealed: “As we get past the age of 35, the kid in us starts leaving.”

Natural Horsemanship is a mathematical science

Pat Parelli uses the two reins of scam to build his “science”: arbitrary numbers on one hand, wild concepts and rephrasing on the other. Numbers, maths are an obsession to Pat Parelli and we can find an endless list of figures and formulas all along the book: “8 Principles of Natural Horse-Man-Ship”, “The 10 qualities of a Natural Horse-Man”, “All horses know that there are only six things they can do”, “Three Systems”, “Eight responsibilities”, “Horses have five natural gaits”, “Each gait basically has three speeds”, “A horse-anality is based on three things”, “Spirit is the multiplying factor“, “I rate everything the horse does […] from a -10 […] to a +10”, “four categories of tools”, “There are 10 levels in the program”, “four categories of horse training”, “use the six keys”, “Four-Step Formulas”, “Four-Phase Theory”, “the big three lies”, “three types of rein position”, “three rein functions”… I took a few examples to show how Pat Parelli and his disciples use numbers to justify the truth they supposedly discovered.

The second tool is the rephrasing of very simple things into obscure sentences. It could be actually quite fun sometimes if not taken so seriously by Parelli’s preachers. The horseman comes with a new concept called “Horse-Analities”, in other words that is nothing else than considering another living being as an individual. It’s an old philosophical concept already debated in Athens a couple thousands years ago and probably before that in India and China. Parelli uses a lot of word formulas to express easy concepts, the most famous being “passive persistence in the proper position”, which actually means nothing more than the importance of being consistent and firm. Pics captions are the most comic rephrasings I found: one photo shows Pat Parelli pulling on a horse to make it move forward over a dry creek bed, psycho-caption displays “Here, Pat is laterally longeing this horse on uneven terrain, purposely challenging the horse”; another shows Pat Parelli working bridleless an advanced horse to back it up, psycho-caption displays “Pat is holding a conversation with his horse, about stopping and then backing up.”
No more comments!

Pat Parelli is a fair horse-man, no question. But he is clearly a better business-man. The method is surprisingly identical to Freud’s when comes the moment to make money: first of all, Pat Parelli is the one, the origin of NH, all that was done before leads to him and all that will be done after is a consequence of his discoveries.
He is the only one who can teach the knowledge to selected disciples, called instructors, who are sorted by Levels and are the sole legit teachers.

“If you didn’t have Natural Horse-Man-Ship [the book], you’d still be doing all the normal things people do with horses and getting nowhere. 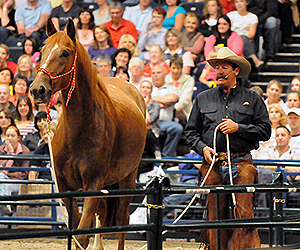 Formation has to be long, very long, which means costly for the students and very fruitful for Parelli himself: “I’ve found that it takes the human about 1,000 hours before he or she is comfortable with being in the saddle […] It’s the next 1,500 to 3,000 hours that tells whether or not a rider is really going to advance and become an expert rider”. When Pat Parelli explains that the first Level (included in the book) may take 20 hours to be passed, he also informs us that “it will take up to 500 hours to reach Level 3.” (this one is not free though), i.e. about two years of regular riding to become a little more than an apprentice. “To become a sixth level horse-man, it’s probably going to take up to 10,000 hours”…
Finally, Pat Parelli quite conveniently discovered a few scientific facts that fit pretty much the catalog and price list available on his web site as he “came up with something in the middle of […] two approaches – the carrot stick.” (for sale), Parelli also leads us to “note that 45, 22, 12, and 6 [feet] are the distances that make a difference to the horse […] they’re also the lengths of rope I mentioned in Tools” (for sale)!

As a conclusion, I can say that I have actually not learnt one thing from Pat Parelli which I did not already read or watched with Tom Dorrance’s True Unity, Ray Hunt’s Think Harmony With Horses and Buck Brannaman’s 7 Clinics. One more time, we can oppose those three great horsemen to this crowd of businessmen looking for horse-people credulity to extort thousands of dollars or euros. Pat Parelli belongs to this crowd, as Clinton Anderson (with whom he shares quite a lot of ideas by the way), John Lyons (although Parelli never says anything bad against the horses) and others (including his own followers like Alfonso Aguilar, Andy Booth and other disciples). You may have read and followed Pat Parelli methods, there is nothing wrong with that. Yet, I can just advise you to choose a more beautiful and respectful philosophy such as the Dorrances’ and Ray Hunt’s. On the other, if you have not read it yet, feel free to skip it and go directly to the above mentioned books and DVDs, you will save your time and money.

Manage Cookie Consent
To provide the best experiences, we use technologies like cookies to store and/or access device information. Consenting to these technologies will allow us to process data such as browsing behavior or unique IDs on this site. Not consenting or withdrawing consent, may adversely affect certain features and functions.
Manage options Manage services Manage vendors Read more about these purposes
View preferences
{title} {title} {title}