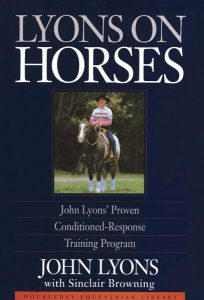 I have had the opportunity to see Lyons-program followers working and I wondered why they looked so distant from their horses. The reading of this book explained it all.

John Lyons understands the mechanics of NH (Natural Horsemanship) but has no feeling with horses, he is not able to communicate with horses _ which is the big difference with Tom Dorrance for instance. John Lyons’ understanding of horses is purely mechanic: horses are binary animals, unable to think or feel, unable to understand.

“If we set up the condition often enough, and we get the same response consistently, then the condition becomes a cue for a specific, desired reaction or response.

The horseman clearly declares his will to become a partner to the horse, to let time to the horse in order to process the cues we want to teach them. He also uses the known principle of pressure and release. We can also positively consider his three training rules, which remain good for any method: training must be safe for the horseman or the horsewoman, training must be safe for the horse, and the horse must be calmer after the lesson than before. I liked to read his saying about the step by step learning process and how we should “cultivate patience, and always remember to give the horse the benefit of the doubt.” John Lyons also talks about feel in his own way when he mentions our “subconscious movement” that actually becomes a cue to the horse . . .

This method could be compared to the Australian horsemanship as introduced by Clinton Anderson. Indeed, both consider horses as robot-animals, things that can not feel, just react to cues given by superior minds that the horseman is supposed to be. Although at least, in my opinion, Clinton Anderson has done a better work in breaking exercises down into segments. He did not fall into contradictions and was able to develop a clear and simple method. Hereunder is a couple of examples to illustrate the limits of the program proposed by John Lyons.

Here, we can read that John Lyons understood the key-principle of making the right thing easy and the wrong thing difficult. Yet, it also appears clearly that he has some problems to make it simple. He gives us the example of the trot that is composed of six different steps!
1 ) First pre-cue is “raising our hands forward”,
2 ) Second pre-cue is “standing up in the saddle and leaning forward”,
3 ) Third pre-cue is “kissing to the horse”,
4 ) First cue is “a light squeeze with both legs”,
5 ) Second cue is “bumping the horse with both legs”,
6 ) Finally, the enforcer is “a hard kick with both spurs”!
This method can not be really efficient and there is the problem of violence (hard kick, spurs).

The lack of efficiency becomes clear when we start to deal with more advanced exercises, such as choosing the good lead at the canter. That sequence is broken down into five or six segments, the first three being supposed to close the deal with 95% of the horses. You should add another two to three segments for the last 5%, depending how difficult they are to manage. We would have liked a simple method: first soft deal, second firm deal, efficient with 100% of the horses!

Taking into account how recognized a horseman John Lyons is, some pages actually scared me.

“I don’t care what the horse has done before or what’s happened to him.

John Lyons considers that a horse’s past makes no difference in its education. I think this can be a problem, as we should always consider our horse’s history: we can not have the same behavior with a spoiled horse as with a beaten horse, we have to consider what it has gone through.

I noticed a few lines in the book that can also be quite embarrassing for a horseman:

“If the horse tries to bite me, I try to kill him. […] I have three seconds in which to kill this thousand-pound beast. The only limitation I’ll put on the murder, is that his head will be off-limits. Remember, I don’t want to blind him, I want to kill him.

That is the worst part of the book and I was actually shocked to read such words written by a so-called horseman. John Lyons clearly justifies violence and advises to use pain in some situations. “Also, it is not always wrong to hit a horse. Sometimes it’s right.” Right after this extremely violent lines, the horseman informs us that we should pet our horse.
So, first we try to kill it during three seconds, then we pet it to explain we like it anyway! “We’ll be using his body to work against him. When the muscles and lungs ache, the horse will begin thinking, “How can I get out of this alive?” […] Notice I said when the lungs ache, not when the horse is tired.” Here again, John Lyons explains that we should hurt our horse, make it feel pain, to establish our leadership over it.

As a conclusion, I think this violence and all the nonsense are enough to discredit John Lyons as a horse whisperer. No real gentle horseman can advise murder and pain against horses. He studied natural horsemanship on the surface and applied the technics to his training method, efficient but insensitive. He is one of those horse(business)men who use NH as a marketing tool to sell books, clinics and other videos. My personal advice: do not read John Lyons unless you are already well informed about Natural Horsemanship principles and philosophy, said knowledge being necessary to extract the interesting and non-abusive content of the book. 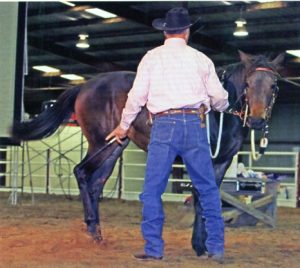