October 15, 2013 / Comments Off on Books: A New Illustrated Edition of J.S. Rarey’s Art of Taming Horses

J.S. Rarey is probably one of the firsts who helped to make Natural Horsemanship technique known to the public. He was probably also one of the first horse(business)men. John Rarey was an Ohio farmer of the 19th century who understood and applied the NH basics. He enounced three fundamental principles on which he built his theory:

These principles are clearly related to some concepts already mentioned in Natural Horsemanship: consistency, gentleness, desensitizing. It is quite interesting to read along the book some concepts and ideas that were contemporary to Xenophon more than 2,000 years ago. 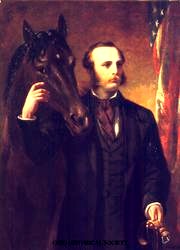 John Solomon Rarey emphasizes how patient we should be when dealing with horses, in particular with young colts: “‘haste makes waste’, that is, waste of time — for the gain of trouble and perplexity.”

The horseman who so brilliantly astonished Europe a century and a half ago and was admired by the Queen of England herself then, insisted on the crucial quality that is to keep his temper: “Fear and anger, a good horseman should never feel.” My only negative criticism of John Rarey has nothing to do with the method that was efficient and kind to horses. He specialized himself in laying down the most difficult animals and explained the process in his book _ not in the first edition yet. 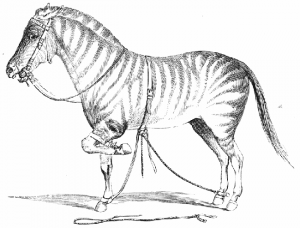 Said process was previously kept secret by him, and as he sold his knowledge to others he also required an oath from those who paid to keep the secret, to never reveal the method . . . he was the only one authorised to sell it. That makes one the first modern horse(business)men as he established the profile:

On the other, it is important to mention that the last edition of this book actually revealed his methods and knowledge in details, as he had too many customers anyway and the word began to spread.

He certainly is one of those who started this Natural Horsemanship tendency in our contemporary horse industry and his work definitely is worth the short reading _ the second part of the book deals with hunting and some equitation habits in Great-Britain which are much less interesting on my mind.

I would like to conclude this article by quoting John Solomon Rarey’s inspiring words:
“The horse, the most beautiful and useful of animals to man, is seldom sufficiently instructed or familiarised, although certainly capable of the greatest attachment to his master when well used, and deserving to be treated more as a friend than a slave.

Tip: the New Illustrated Edition of J.S. Rarey's Art of Taming Horses can be found for free on the internet: www.gutenberg.org

Manage Cookie Consent
To provide the best experiences, we use technologies like cookies to store and/or access device information. Consenting to these technologies will allow us to process data such as browsing behavior or unique IDs on this site. Not consenting or withdrawing consent, may adversely affect certain features and functions.
Manage options Manage services Manage vendors Read more about these purposes
View preferences
{title} {title} {title}